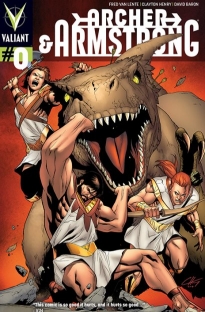 Archer & Armstrong #0 - The Epic of Gilgamesh

Here, for the first time, the one hundred percent true story of the Epic of Gilgamesh can finally be told. A tale of three warriors, the adventuring Anni Padd, three immortal brothers that would one day roam the Valiant Universe as Armstrong, the Eternal Warrior, and the mysterious Timewalker on a quest from the city-state of Ur to the mythical Faraway to recover the Boon. And their sword-swinging conquest of a land beyond time itself. A land inhabited by man eating brutes, futuristic technology, and perhaps the greatest secret in all of the Valiant Universe!