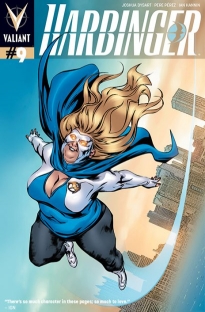 Nothing can bring her down. She's the light in the dark. The soul of a rising resistance movement. Here now, for the first time, is the story of Zephyr (aka Faith Herbert... but shhh don't tell anyone)! As danger closes in on all sides, Faith must begin the trials and tribulations of being the Valiant Universe's first real-life superhero. Learn the secret potential of her powers and the truth about her time at the Harbinger Foundation, then follow her into battle to save the other Renegades. Look, up in the air! It's a bird, it's a plane... it's freakin' Zephyr!