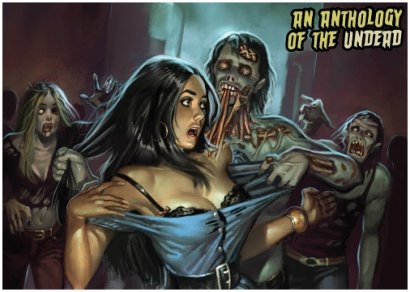 Asylum Press unleashes a giant collection of over 15 flesh-eating zombie tales to shock and horrify! Featuring an international cast of artistic talent. Szymon Kudranski (Spawn) brings us The Barber, a tale of the undead and the mob. Dwayne Harris unearths zombies from 1776 in Deadcoats. A cat lady's feline friends develop a taste for the flesh in Creature Converts. A gangster's taste for a delicacy becomes his end in Feast. A zombie must confront what he's become in Hate. In The Jiang Shi we get a taste of Asian zombies. Billy George brings us The Undead Templars, a tale of the blind dead. Featuring an all-new tale by horror master Tim Vigil. Robert S. Rhine brings us Mr. Dead, and Frank Forte delivers Beheaded. Book also includes a special 24-page preview of the upcoming series Undead Evil.