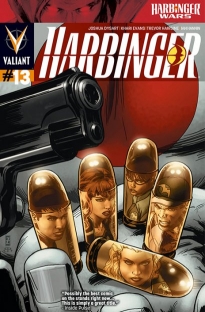 HARBINGER WARS tie-in! The Renegades vs. Bloodshot! At last, the battle you've been waiting for! But the Harbinger hunter called Bloodshot is a much more dangerous and much more clever foe than Peter Stanchek and the Renegades ever could have anticipated. Plus: what is the secret of Toyo Harada's first Harbinger War?