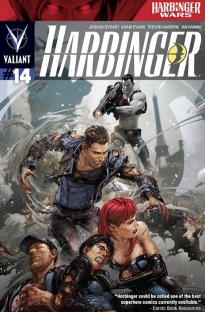 Choosing sides is never easy - especially when the decision could get you killed. As the Harbinger Wars reach their boiling point, Peter and his team must decide what role to play as the lines between friend and foe blur and the casualties pile high all around them. But just when all seems lost, a new ally will emerge from the unlikeliest of places - and Peter Stanchek's ragtag band of teenage psiots will add a new hero to their ranks. Who will join the Harbinger Renegades?